I’m constantly surprised by what constitutes “news” in the world of The Golden Girls. Recently, the creation of action figures debuting at New York’s Comic Con was a super-big deal. A big deal to everyone except Betty White, that is.

Ms. White wasn’t readily available for comment. “There’s nothing really for Betty to say,” said Jeff Witjas, a representative for the actress. “She has not seen the dolls.”

In other Miami Nice super-big deal news, there’s a Golden Girls puppet show in a limited run on Broadway, er, off-Broadway. I heard about the show and was immediately annoyed. I’m a bit of a purist, and, well, how do I say this? I don’t like puppets. However, for the love of the Girls, I forced myself to watch the trailer, and it’s lovely. They had me at Dorothy biting her knuckles. Kudos, Jonathan Rockefeller. Well done.

Two things of note in the world of Spelling: Spelling Manor is up for grabs (all 123 rooms of it), and Tori is pregnant with her fifth child. I HOPE People paid her substantially for the story because homegirl’s in debt. BFF Jennie Garth was obviously around with congrats. I’m still sad their mystery show didn’t work out, but I’m more sad that they didn’t hire better writers for it. WOOF.

Want to own something that lit up Lucille Ball’s life? Literally. You can buy a chandelier she owned for a mere $2,000.00 on Craigslist. 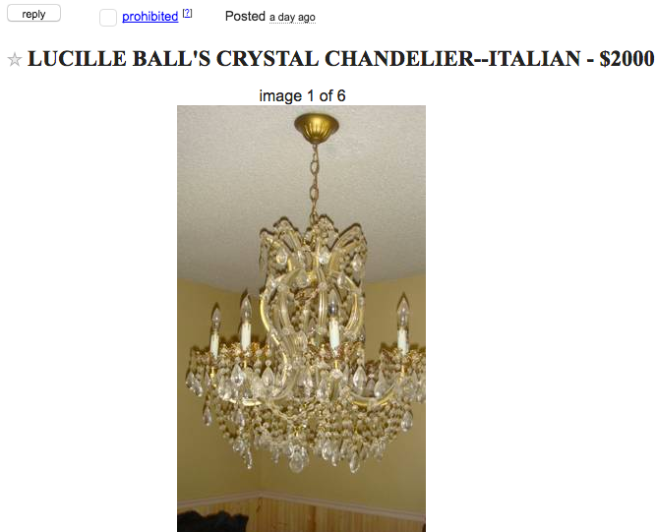 If you can’t swing the $2K, perhaps you’re interested in more attainable items that added a glow to the funny gal’s life:

Her perfume – The lady loved her signature scent. Her alleged last words were, “My Florida Water.” You can get yourself some on Amazon for around 6 bucks.

Her son hosting a zoo tour – A Day at the Zoo

I wrote awhile back about how Lucy was a bit of a ball-buster (among other things). A tough lady, for sure, but one who lived on her own terms and created quite a life for herself. A life that included children who love to sing and crystal Italian chandeliers.